That is not dead which can eternal lie.

…And with strange aeons even posts may be published.

In an age where social networks rule supreme, we raise our fists and call out “no more!” 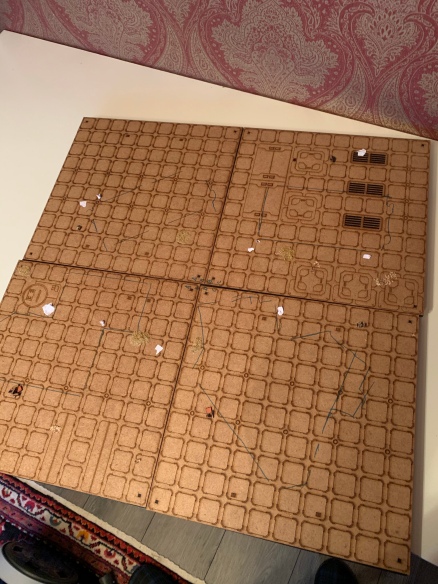 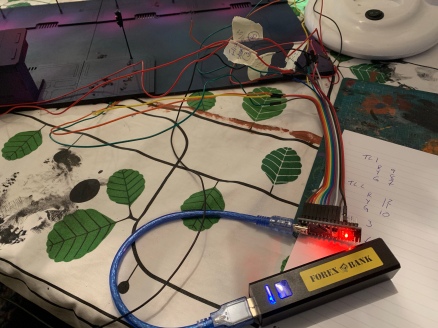 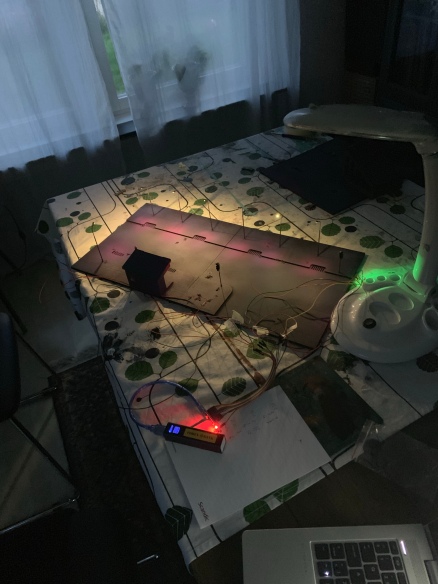 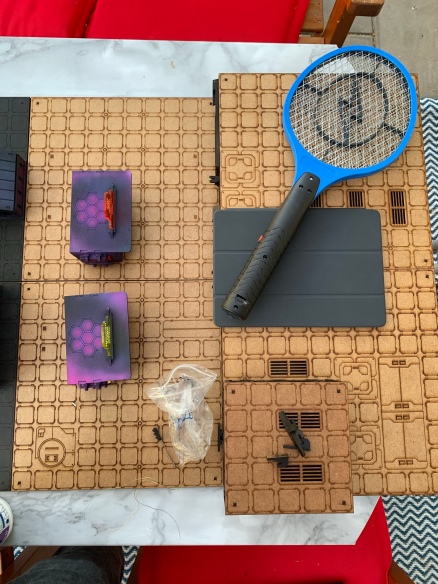 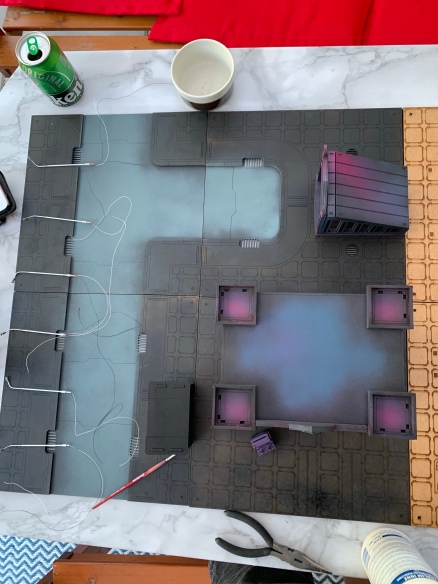 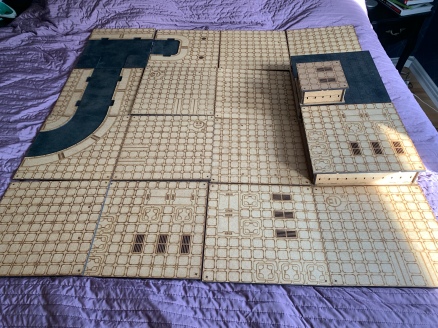 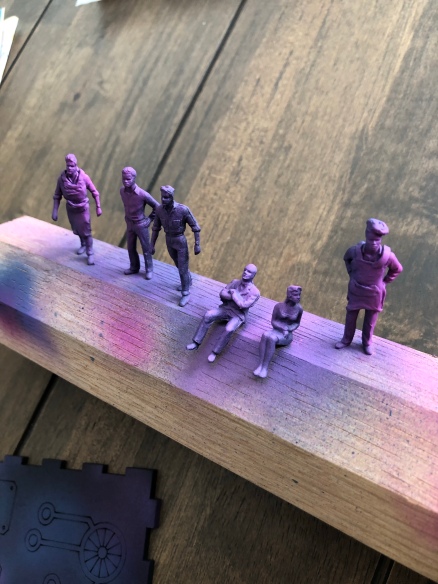 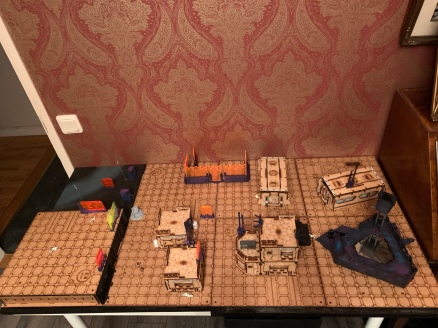 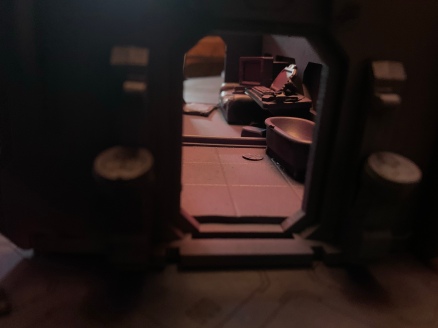 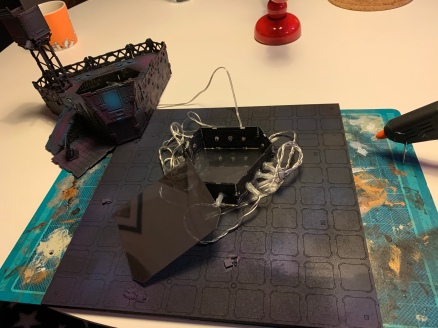 I was about to split the post in two, but who cares, really?

I made myself some demon twins for Malifaux; Lelu & Lilitu. Albeit with more fitting clothes, of course! Pardon for the variation in picture quality, I threw in a few WIP pictures. Sculpting hands is hard work! 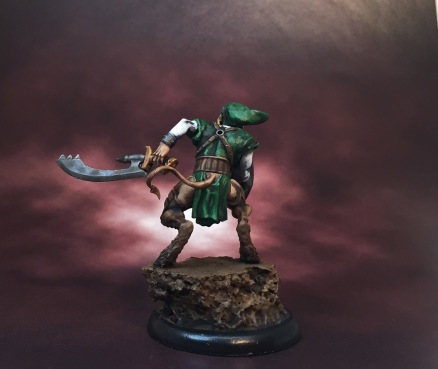 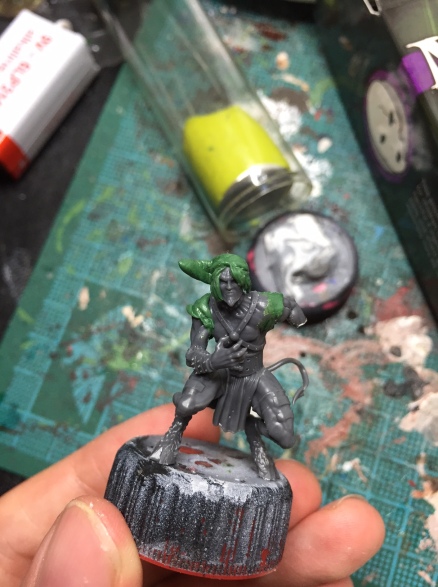 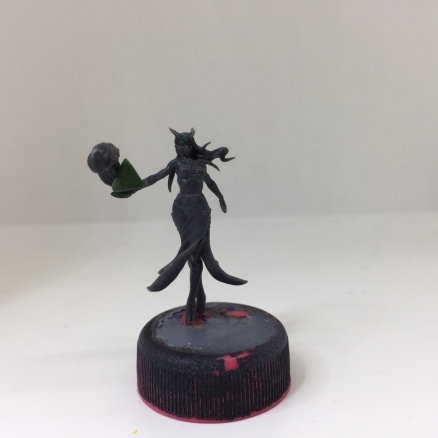 It’s a, a violent playground

Wanted some more semi-creepy/postapoc terraint so made a playground out of stuff from  Sarissa precision, 4ground and ice cream sticks.

It’s all mounted on a base with the same kind of Zuzzy mat that the rest of my board has, so hopefully it blends in while still having some coherency. 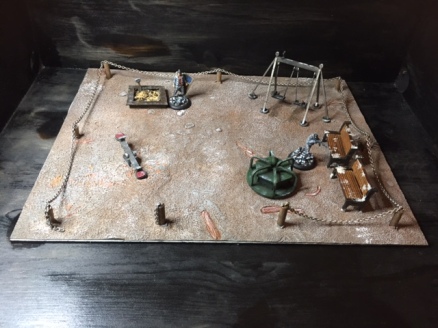 We can’t stop here, this is trapper country!

Instead of having terrible angst over not publishing my articles, I shall instead just post the pictures of my finished models and not care too much about the words. Who’s reading anyways, when there’s pictures to look at.

Below are my 2 proxies for Freikorp Trappers, Malifaux game. They’re based off old Warzone models from the 90’s or early 2000. Love the looks of those old Bauhaus troopers so I did a gunswap and called it a day. 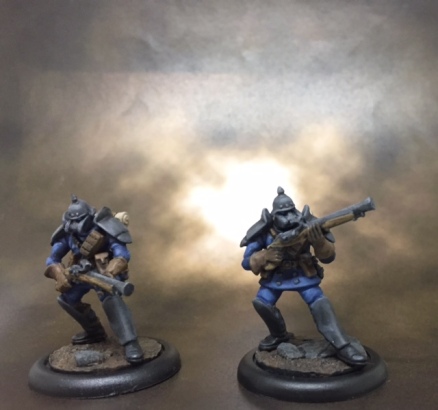 Seriously lovely models to work with. Actually enjoyed painting these ones! 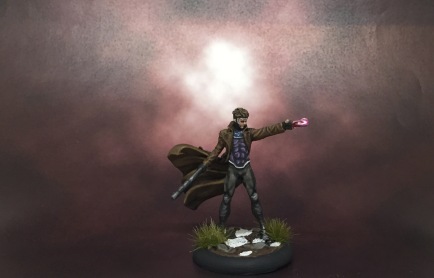 Tiny model-time. A Mysterious Effigy for my Neverborn, Malifaux again. 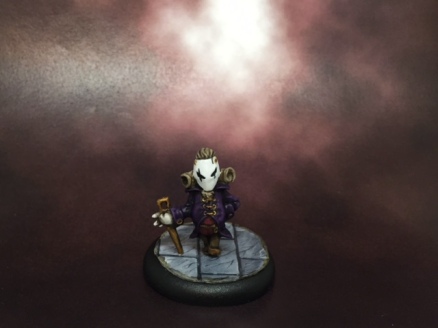 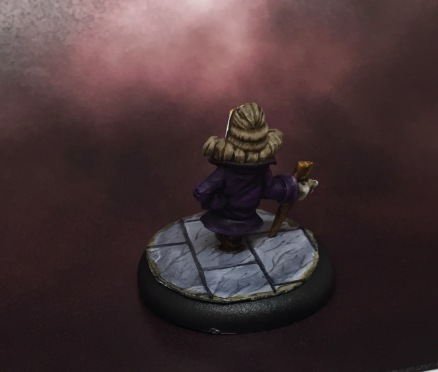 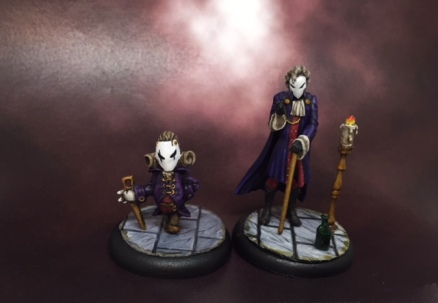 He has my eyes!

Lastly I attempted to sculpt Hoffmanns totem, The Mechanical Assistant. It was a mishmash of greenstuff and old bits I had lying around, and in the end it sadly ended up a bit too big, scale-wise. Anyways, it’s done and I don’t think he’ll see play anytime soon anyways! 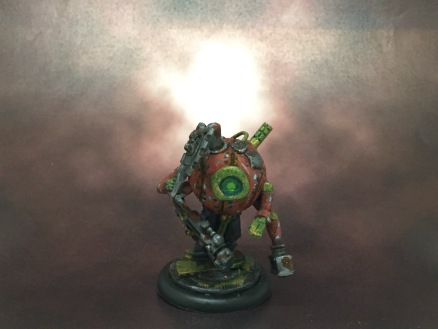 You can hear the clatter of rain outside; it’s muffled as if run through a filter, but it’s still there. The room is empty save for an old, rusted ,steel-framed bed in one of the corners. There’s no sheets, just a mattress. It doesn’t feel that bad, despite its spartan look – at least it’s not the bare floor. If you had to describe your environment in one word, it would be “Grey”.

The sound of rain is gone now. You turn over in the bed and spot the television set in the middle of the room. The antenna hopelessly stretches up towards the ceiling like an old wizened willow. You wonder why it’s there since there’s nowhere to plug it in. You also wonder, briefly, why you don’t focus your attention on how it got there. The screen wakes up. First static, then slowly merging in a myriad of bright colors which fill the room with ghost-like multicolored rays penetrating the filtered Grey.

I wonder what’s on.

END_OF_DOCUMENT_TOKEN_TO_BE_REPLACED

Snowy with a chance of dice rolling

As if an entire (4 models, but still…) X-men gang in less than a months time wasn’t enough, I’ve also been making a bunch of terrain! I’ve assembled and painted two buildings, dumpsters, garbage truck and scaffolding from TTcombat and a bunch of scatter terrain from Mantic (Mars attacks, Battlezone etc).

Not much else to say. Made the garbage bags out of…actual garbage bag, everything is pretty much drenched in home-made wash which smells of death and rot (no, really!), and everything’s covered in snow, to fit with the rest of my terrain/board. The terrain is mostly aimed at Batman Miniature Game or Marvel Universe Miniature Game, since it’s “Modern” in style. After years of ruined wizard towers and ruined grimdark space bases, the modern/city terrain has really left me wanting for more, it’s such a joy to create and paint.

Once I’m happy with an entire 3’x3′ game board of modern terrain I am genuinely planning to get some interior such as chairs and beds for the different buildings, but I don’t want to focus on that before I have all the other stuff settled.

So without further ado; a bunch of pictures. 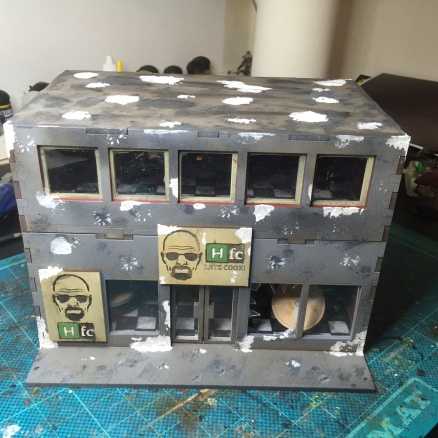 First floor, tables and all! 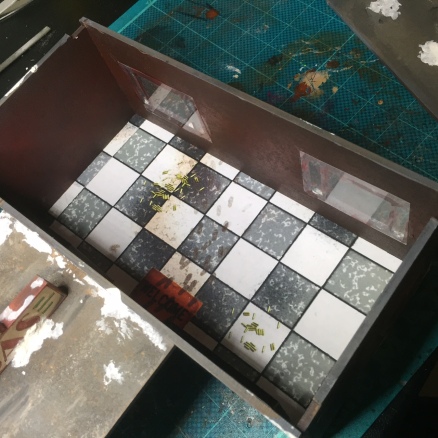 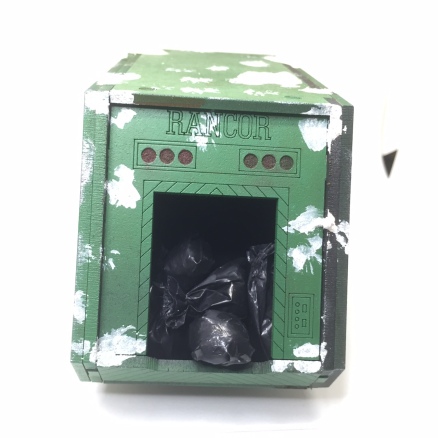 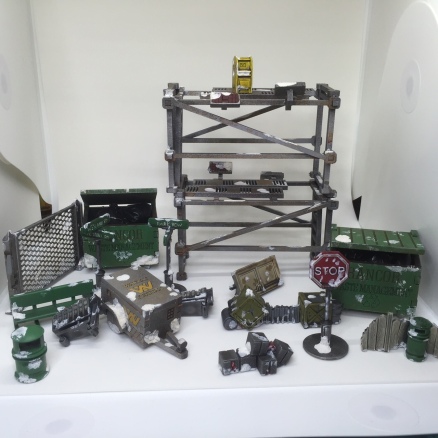 …We roam around the forest looking for fights.
We’re X-men, we’re X-men in tights.
We rob from the rich and give to the poor, that’s right!
We may look like sissies, but watch what you say or else we’ll put out your lights….Ahem. Anyways.

New times calls for new game systems. Not that I necessarily have the time for yet another game system, but really, who’s counting? Knight Models released a new game with lovely sculpts of my favourite super heroes, so I obviously had to buy them, simple as that.

Even though the blog-radio-silence as of lately, I’ve done a bunch of hobbying, more or less every other night (every other night I put my oldest to bed, so the nights where the wife puts him to bed, I get to paint! win-win).

Apart from 4 really greatly detailed sculpts (Knight Models really do know their sculpts), the starter box included stat cards for all of them, and a rulebook containing one scenario. As of now there’s also starter boxes for Avengers and Guardians of the Galaxy, but I’m not as keen on them as I am with the X-men. The bases are sadly sculpted, so they do all look the same, but a bit of green stuff and grass tufts remedied the situation, thankfully.

Six great reasons to walk away.

Buns of steel is a common concept in this merry gang.

Same picture, but from behind! Rear-freem! 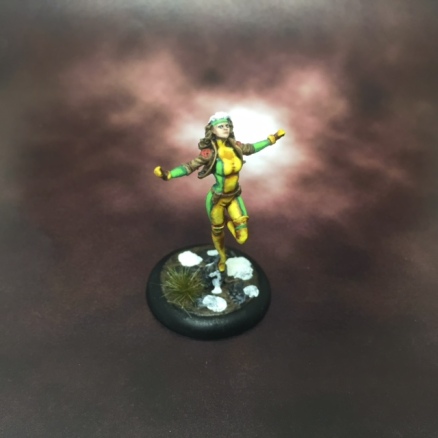 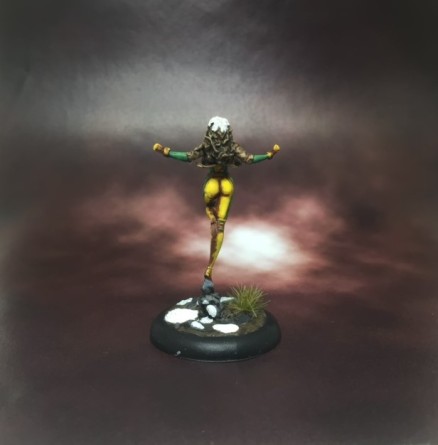 Zoomin’ off into the night.

Next up, Colossus. Whom I have grown deeply fond of after the Deadpool movie. 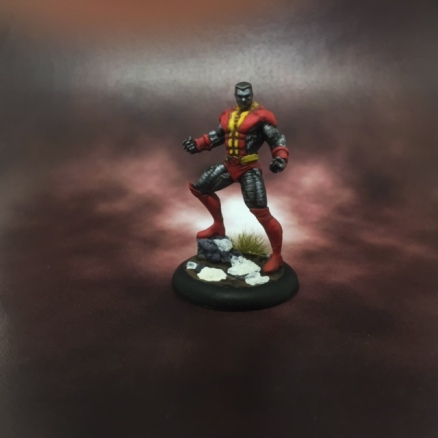 If I hadn’t already mentioned buns of steel…

To spend even more time on a game I’m not even sure when I’ll get the chance to play, I printed and laminated all the X-men gangs stat cards with fitting backsides. And trust me, it wasn’t easy finding a non-disturbing one of Rogue. Laminated stuff is really great, especially when combined with dry-erase markers. Mmmm Lamination. 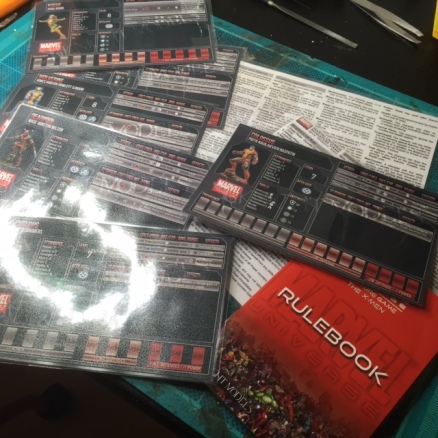 Backlog of models to blog about, unheard of!

For some reason, I felt like painting up a Malifaux  Hunter, basically a robot cat with a harpoon for a tail (the things they dream up these days!). I have a Hoffman crew (posted somewhere on the blog) that I’ve had an itch to expand, so besides the Hunter I’m also underway with a Metal gamin and a scratch built mechanical attendant. We’ll see if they ever see game time, not a lot of that going on at the moment. On the other hand I’ve been painting a lot lately, so who cares, I’m just going to try and keep the motivation up.

Considering it was some 4 years since I painted the other robots there was some issues trying to make the hunter look the same, but I think I got it about right. Also, some sort of record – after undercoat I think I painted it in just under two hours! Yes, that’s my definition of speed painting at least.

That’s it for now; I’m blogging on my phone in the dark in my bed so not really optimal for pooping of words. So, good night and picture below! 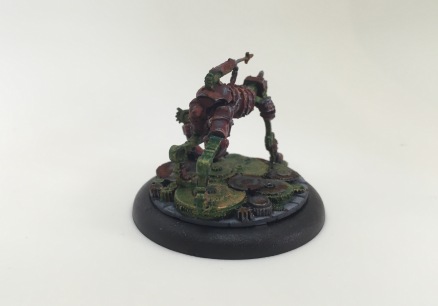